AFA (Air Force Academy), located at Pirassununga, State of São Paulo, is responsible for the training of Pilots, Administrative and Aeronautics Infantry Officers for the Brazilian Air Force.

The history of the Brazilian military pilots schools goes back to 1913, when the Brazilian Aviation Schoolwas founded, at Campo dos Afonsos, State of Rio de Janeiro. Its mission was to provide instruction at similar levels to those of the best European schools at the time; Blériot and Farman aircraft, made in France, were available for the instruction of the pupils. The Great War 1914-1918, however, forced its instructors to leave and the school was closed.

At that time, both the Brazilian Army and Navy had their own air arms, the Military Aviation and the Naval Aviation. The Navy bought Curtiss F seaplanes in May 1916 to equip the latter, and in August of the same year, the Naval Aviation School was created.

The Military Aviation, however, only activated its Military Aviation School after the Great War, on 10 July 1919. Among the aircrafts used at the school, one could find the Sopwith 1A2, Bréguet 14A2, and Spad 7.

Until the beginning of the 1940s, both schools continued with their activities. 1The Brazilian Government was concerned with the air war in Europe and decided to concentrate under a single command the military aviation activities. 6Thus, on 20 January 1941, the Air Ministry was created and both the Army and Navy air arms were disbanded, their personnel and equipment forming the Brazilian Air Force. On 25 March 1941, the Aeronautics School was based at Campo dos Afonsos, and its students became known as Aeronautics Cadets from 1943 to the current days.

As early as 1942, it became clear that the Aeronautics School would need to be transferred to another place, offering better climate and little interference with the flight instruction of the future pilots. 2The town of Pirassununga was chosen among others, and, in 1952, the first buildings construction was initiated. The transfer of the School activities to Pirassununga occurred from 1960 to 1971. 3The School was redesigned as the Air Force Academy in 1969.

The motto of the Academy is the Latin expression “Macte Animo! Generose Puer, sic itur ad astra”, extracted from the poem Thebaida, by the Roman poet Tatius. It is an exhortation to the cadets, which can be translated as Courage! This is the way, oh noble youngster, to the stars.

The instruction of the Aeronautics Cadets, during the four-year-long course, has its activities centred in the words COURAGE – LOYALTY – HONOUR – DUTY – MOTHERLAND. The future officers take courses on several subjects, including Calculus, Computer Science, Mechanics, Portuguese and English, given by civilian lecturers, Air Force instructors and supervisors. The military instruction itself is given on a daily basis, and 4the Cadets are trained on different subjects, including parachuting, and sea and jungle survival. 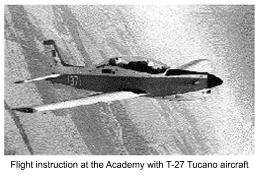 According to the chosen specialization, the Cadet will receive specific instruction:

Pilots: Instruction on precision maneuvering, aerobatics, formation flying and by instruments, with 75 flying hours on the primary/basic training aircraft T-25 Universal, beginning on the 2nd term of the 1st year and completed in the 3rd year. Advanced training is given on T-27 Tucano aircraft, with 125 flying hours.

Administrative: Training on the scientific and technological modern foundations of economics and financial management, and logistics training.

During their leisure time, the Cadets participate on the activities of seven different clubs: Aeromodelling, Literature, Informatics, Firearms shooting, Gauchos Heritage (for those coming from the South of Brazil), Gerais Club and Sail Flying. The clubs are directed by the Cadets themselves, under supervision of Air Force officers.

Flying as the eagles do!

Mark the alternative that has the fragment from the text INCORRECTLY changed into Active Voice.