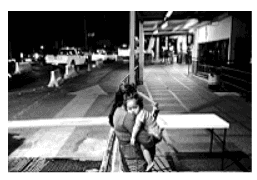 For most, The Gateway International Bridge functions as it should, allowing people to get between the U.S. and Mexico. But on a hot Sunday afternoon, a dozen migrants at the mouth of the bridge weren’t getting anywhere at all. They had been told, once again, to wait. At a press conference the next day, President Trump once again touted the border wall he has promised supporters.

“The wall is getting longer and taller and stronger each and every day”, he said, even though construction has not begun. The President’s characterization of the physical wall was false, but his Administration has effectively erected an invisible one.

It is built, in part, from situations like the one at the bridge, which illustrates the problem with 1this kind of barrier. The practices that Trump praises for keeping out criminals also punish those who are trying to follow the rules.

Those migrants who spoke to TIME at the bridge had varied stories but shared a determination to cross. Some understood a bit of what could happen to them next. How long could it take to get processed? And if they did ultimately apply for asylum, it remained to be seen whether their stories would qualify. The regulations governing such matters are complicated, and the vast majority who apply are rejected. But in theory, their fates would be decided at immigration courts, not at the border.