As a single mom, Cordia Harrington just needed to bring home the bacon.
She ended up rolling in dough. 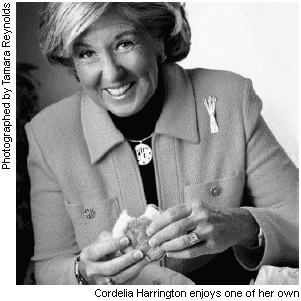 Cordia Harrington was tired__( I )__standing up all day and smelling like French fries__( II )__night. A property developer, she also owned and operated three McDonald’s franchises in Illinois, but as a divorced mother__( III )__three boys, she yearned__( IV )__a business that would provide__( V )__her children and let her spend more time__(VI) __them.
Her aha momentstruck, strangely enough, after she was nominated in 1992 to be on the McDonald’s bun committee. “The other franchisees, all men, thought that was hilarious because of the word bun,” she recalls. “But the joke was on them: They didn’t know the company would be picking me up in a corporate jet to see bakeries around the world. Every time I went to a meeting, I loved it. This was global!”
The experience opened her eyes to business possibilities. When McDonald’s decided it wanted a new bun supplier, Harrington became determined to win the contract, even though she had no experience running a bakery.
“You see a tiny crack in the door, and you have to run through it,” she says. “I really believed I could do this.”
Harrington studied the bakery business and made sure she was never off executives’ radar. “If you have a dream, you can’t wait for people to call you,” she says. “So I’d visit a mill and send them photos of myself in a baker’s hat and jacket, holding a sign that said ‘I want to be your baker.’”
After four years and 32 interviews, her persistence paid off.
Harrington sealed the deal with a handshake, sold her franchises, invested everything she owned, and borrowed $13.5 million. She was ready to build the fastest, most automated bakery in the world.

The prepositions that appropriately fill in blanks I, II, III, IV, Vand VI, in the text, are