The Brazilian government started negotiations with Argentina to implement a Center of Integrated Command and Control in the Triple Border – which unites the two countries and Paraguay – as a way to intensify anti-smuggling efforts in the area.
The information was given on Thursday (19) by the Minister of Justice José Eduardo Cardozo, at a forum held by Folha in São Paulo, entitled “Smugglingin Brazil”.
The idea is to bring the police forces of the three countries which could draw together intelligence and enforcement operations. The neighbors could help each other also with commercial information and immigration in the region. 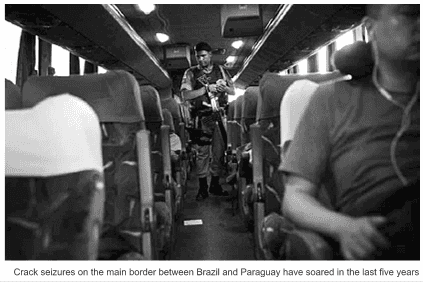 “Even if we put a man every 50 feet along the border, it would not be enough supervision. We need intelligence,” the minister said.
He said that border control is one of the main problems faced by Brazil in regards to public safety, and the solution would come from integrated actions combined with the use of technology.
According to the Brazilian proposal, Paraguay would be exempt from the project cost, which would be funded by Brazil and Argentina, the minister said.
The experience derived from the Integrated Centers erected in the 12 host cities for the World Cup was considered successful and inspired the idea of a unified initiative between the three countries.
The region of the Triple Border, where the Brazilian city of Foz do Iguaçu is located, is a major entry point for smuggled goods in the country. Most come from Paraguay.

The sentence “The information was given on Thursday by the Minister of Justice José Eduardo Cardozo, at a forum held by Folha in São Paulo” in the active voice is: