The Man Who Sold the Eiffel Tower 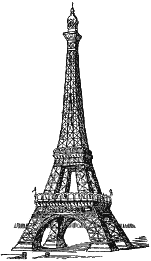 Paris, 1925. World War I had finished and the city was full of people with cash looking for business opportunities. Victor Lustig was reading the newspaper one day and found an article about the Eiffel Tower. It said the tower was being neglected because it was too expensive to maintain. Lustig a great ‘business opportunity’ – he would sell the Eiffel Tower!
Lustig wrote to six important businessmen in the city and invited them to a secret meeting in a well-known Paris hotel. He said he was a government official and he told them that he wanted to talk about a business deal. All six of the businessmen came to the meeting.
At the meeting, Lustig told them that the city wanted to sell the Eiffel Tower for scrap metal and that he had been asked to find a buyer. He said that the deal was secret because it would not be popular with the public. The businessmen believed him, perhaps the Eiffel Tower was never planned to be permanent. It had been built as part of the 1889 Paris Expo, and the original plan had been to remove it in 1909.
Lustig rented a limousine and took the men to visit the tower. After the tour, he said that if they were interested, they should contact him the next day. Lustig told them he would give the tower contract to the person with the highest offer. One of the dealers, Andre Poisson, was very interested, but he was also worried. Why was Lustig in such a hurry?
The two men had a meeting, and Lustig confessed that he wasn’t looking for the highest offer. He said he would give the contract to anybody – for a price. Poisson understood: Lustig wanted a little extra money “under the table” for himself. This was Lustig’s cleverest lie, because now Poisson believed him completely.
Lustig sold Poisson a false contract for the Eiffel Tower – and on top of that, Poisson paid him a little extra money “under the table”. Lustig put all the money in a suitcase and took the first train to Vienna. Poisson never told the police what had happened – he was too embarrassed. After a month, Lustig returned to Paris and tried to sell the Eiffel Tower again, but this time somebody told the police and he had to escape to America. There, he continued his criminal career and finished his days in the famous Alcatraz prison.

Read the reported sentence below, from the text.

Lustig told them he would give the tower contract to the person with the highest offer.

Which of the alternatives below corresponds to Lustig’s direct speech?