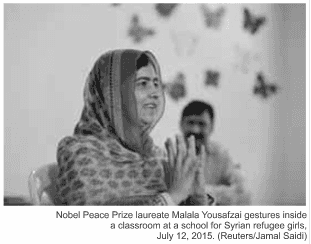 Malala Yousafzai, the youngest winner of the Nobel Peace Prize, celebrated her 18th birthday in Lebanon on Sunday by opening a school for Syrian refugee girls and called on world leaders to invest in “books not bullets”. Malala became a symbol of defiance after she was shot on a school bus in Pakistan in 2012 by the Taliban for advocating girls’ rights to education. She continued campaigning and won the Nobel in 2014.

“I decided to be in Lebanon because I believe that the voices of the Syrian refugees need to be heard and they have been ignored for so long,” Malala told Reuters in a schoolroom decorated with drawings of butterflies. The Malala Fund, a non-profit organization that supports local education projects, provided most of the funding for the school, set up by Lebanon’s Kayany Foundation in the Bekaa Valley, close to the Syrian border. The Kayany Foundation, established by Syrian Nora Joumblatt in response to Syria’s refugee crisis, has already completed three other new schools to give free education to Syrian children in Lebanon. The Malala school can welcome up to 200 girls aged 14 to 18.

“Today on my first day as an adult, on behalf of the world’s children, I demand of leaders we 1must invest in books 2instead of bullets,” Malala said in a speech. Lebanon is home to at

least 1.2 million of the 4 million refugees that have fled Syria’s war to neighboring countries. There are about 500,000 Syrian school-age children in Lebanon, but only a fifth are in formal education. “We are in danger of losing generations of young Syrian girls due to the lack of education,” Joumblatt said in a speech at the opening of the school. “Desperate and displaced Syrians are increasingly seeing early marriage as a way to secure the social and financial future of their daughters. We need to provide an alternative: Keep young girls in school instead of being pressured into wedlock.”

Lebanon, which allows informal settlements on land rented by refugees, says it can no longer cope with the influx from Syria’s four-year conflict. More than one in four people living in Lebanon is a refugee. The United Nations says the number of Syrian refugees in neighboring countries is expected to reach 4.27 million by the end of the year. “In Lebanon as well as in Jordan, an increasing number of refugees are being turned back at the border,” Malala said. “This is inhuman and this is shameful.”

Her father Ziauddin said he was proud she was carrying on her activism into adulthood. “This is the mission we have taken for the last 8-9 years. A small moment for the education of girls in Swat Valley: it is spreading now all over the world,” he said.

A expressão “instead of” (ref. 2) indica uma ideia de: