Words that define the present

At a time when the world is changing more quickly than ever before, we need a new vocabulary to help us grasp what’s happening. 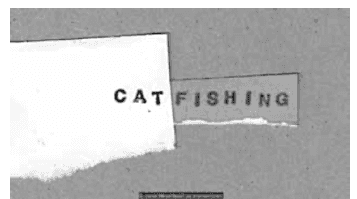 Catfishing. This word would make more sense if it referred to fishing for cats, but in fact, it refers to people who construct false identities online. Whether out of boredom, loneliness or malice, they lure other people into continued messaging correspondence, thereby building false relationships with them (the apparent source of the term “catfish” is a 2010 documentary called Catfish, whose verity, ironically enough, has been questioned).
There are two ways of looking at this: 1) The internet/cyberspace is wonderful, because it gives people the freedom to augment or totally change their identities, and this is a marvellous new dawn for human expression, a new step in human evolution. 2) Nah, it’s a false dawn, because the internet is essentially a libertarian arena, and, as such, an amoral one (lots of “freedoms” but with no attendant social obligations); it is a new jungle where we must watch our backs and struggle for survival, surely a backward step in evolution. I lean toward the latter.
(Cameron Laux. www.bbc.com, 08.08.2018. Adaptado.)
According to the first paragraph, new words like “catfishing” are necessary because they