Whales are people, too 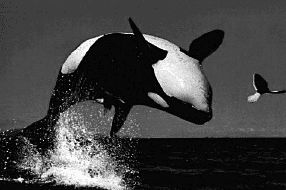 One of the most important features of science is that scientific progress regularly leads to important ethical questions. This is particularly true with research about cetaceans — whales, dolphins and the like — because it has become increasingly apparent that the inner life of these nonhumans is more complex than most humans realize. We have learned that their capacity for suffering is significantly greater than has been imagined — which makes much human behavior towards these nonhumans ethically problematic.
There is now ample scientific evidence that capacities once thought to be unique to humans are shared by these beings. 1Likehumans, whales and dolphins are 'persons'. That is, they are self-aware beings with individual personalities and a rich inner life. They have the ability to think abstractly, feel deeply and choose their actions. Their lives are characterized by close, long-term relationships with conspecifics in communities characterized by culture. In short, whales and dolphins are a “who”, not a “what”.
2However, as the saying goes, there is good news and there is bad news.
The good news is that the scientific community is gradually recognizing the importance of these ethical issues. For example, more marine mammal scientists are steering away from doing research on captive dolphins. More significantly, a small group of experts who met at the Helsinki Collegium for Advanced Studies in the spring of 2010 to evaluate the ethical implications of the scientific research on cetaceans concluded that the evidence merited issuing a Declaration of Rights for Cetaceans: Whales and Dolphins. This group included such prominent scientists as Lori Marino and Hal Whitehead. Particularly important in this declaration was the recognition that whales and dolphins are persons who are "beyond use". Treating them as 'property' is indefensible.
Unfortunately, while there has been consistent progress in scientists' sensitivity to the ethical issues, the same cannot be said for those who use cetaceans to generate revenue.